The project of development of the tourist-recreational cluster of Kronshtadt will be presented at the St. Petersburg International Economic Forum-2019 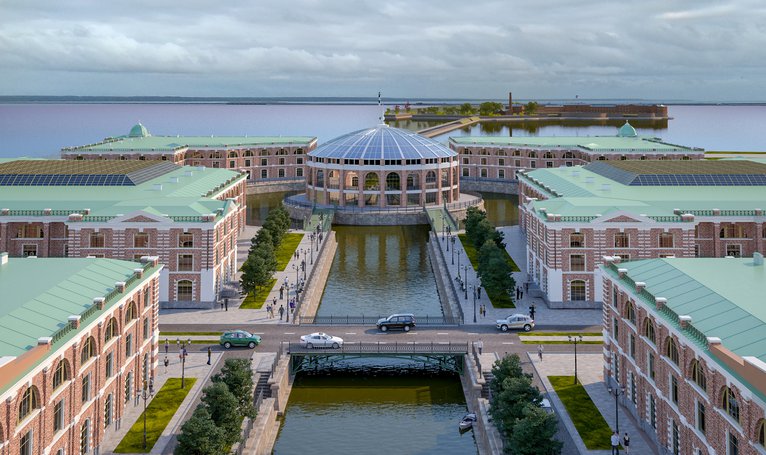 The city of military glory and the UNESCO World Heritage Kronshtadt will become more open and attractive for tourists and residents of St. Petersburg. Russian President Vladimir Putin ordered the creation of an autonomous non-profit organization, called upon to form a tourist-recreational cluster in the Cradle of the Russian fleet. This will increase the number of tourists visiting the city to 5 million per year, and in Kronshtadt itself there will be up to thousands of new jobs. Start of work — the summer of 2019.

The founders of the autonomous non-profit organization should be the Ministry of Defense of the Russian Federation and the city of St. Petersburg. Under the governor of St. Petersburg, a working group on the tourism and recreation cluster will be formed for interdepartmental cooperation. It was decided that the project will be included in the Federal Target Program “Development of domestic and inbound tourism in the Russian Federation”, developed by the Ministry of Economic Development of Russia in the restoration of the following objects of cultural heritage of the federal level: forts “Peter I”, “Alexander I” and “Kronslot” and a mooring wall in the Coastal Harbor. At the same time, the implementation of the main part of the project is planned through private investment.

When creating the concept, the best world experience of military historical parks and memorials that are popular with tourists was studied, among them: The battleship memorial “Arizona” (in the harbor of Pearl Harbor, USA) and the “Peace Museum” on the island of Okinawa (Japan), which are dedicated to individual events of the Second World War, as well as the sea museums “Cutty Sark” (London, UK) and “Vasa” (Stockholm, Sweden). Now in Russia it is planned to create the most ambitious project dedicated to the history of the navy!

Details of the project will be presented at the SPIEF-2019. It is already known that the first stone for large-scale construction and reconstruction in Kronshtadt will be symbolically laid on the Day of the Navy of Russia, July 28. The park itself, which is scheduled for full completion in 5 years, will be opened to visitors in stages.

Part of the concept of the Kronshtadt tourism and recreation cluster was presented at the Admiralty during the December extended meeting with the participation of interim Governor of St. Petersburg Alexander Beglov and Defense Minister Sergei Shoigu. The construction of the park is planned in the territories alienated by the military department in favor of the autonomous non-profit organization.

Main Museum of the Navy of the World

So, Kronshtadt should become the largest island-museum in the world dedicated to the history of the Navy: great battles, outstanding commanders-in-chief, unique ships, with the opportunity to immerse themselves in the atmosphere of time and place. On the total area of 80 hectares there will be a historical park, which includes museum, educational and tourist components.

In the park there will be educational routes dedicated to the great battles and commanders, ships and even maritime specialties. A trail dedicated to significant geographical discoveries will be developed jointly with the Russian Geographical Society.

The famous forts of Kronshtadt will become an open part of the island-museum Fort “Peter I” will take historical reconstruction, there will be recreated the image of the old city of the XVIII century. There will be authentic taverns with old Russian cuisine, fairs and souvenir shops. At the “Alexander I”, where the funicular will deliver guests all the year round, there will be an opportunity to hold performances, the audience of which will be able to become participants. “Kronslot”, the first fort of Kronshtadt (built in 1704), will allow to hold ceremonies according to the canons of the time of Peter the Great. Thanks to the inner marina of the fort, which is planned to be reconstructed, it will be possible to go there on yachts and boats.

The main exhibition, of course, will be located in the coastal part of the island of Kotlin. The museum “Timeline” includes themed halls where historical events of different years will be presented. A lecture hall will also appear here to show short films about modern military naval equipment, military developments and humanitarian operations (the Syrian campaign, the Arctic, etc.).

Here is also the Hall of Maritime Glory. Leading maritime powers will have the opportunity to present a gift to the museum. In addition to Russia, the USA and China, these are Japan, India, Great Britain, France, Germany, the Netherlands, Turkey, the countries of the Persian Gulf, etc.

In the tourist-recreational cluster, it will be possible to climb aboard active warships that can come here for open doors. And the attraction “Sea Battle” will allow its visitors, thanks to virtual reality, to feel like a pilot of a jet plane taking off from a heavy aircraft-carrying cruiser!

Those who wish can also visit the museum on board the first Soviet nuclear submarine “Leninskiy Komsomol” (originally K-3, the third in the world).

According to the concept of development, the largest oceanarium in Russia should appear in Kronshtadt, which was so expected in St. Petersburg. There are not only rare species of inhabitants of the deep sea and show-programs. There will be research laboratories, as well as a children’s technology park — to get acquainted with the maritime professions. Next to it there will be a diving center with an outdoor pool.

You can fully soak up the salty sea air: tourists will be offered to see the entire park and the Gulf of Finland from a bird’s eye view, rising into the air on the airship. On the land — cafes and restaurants will present the naval and sea cuisines from around the world. And it will be possible to stay at night, if desired, in hotel complexes of various price categories: from 3 to 5 stars. Visitors will have the opportunity to spend the night in the only hotel in the world aboard a warship, as well as spend the night at the fort “Kronslot”, where it is supposed to equip several rooms in a maritime style, named after eminent admirals.

It will become much easier to get to Kronshtadt, thanks to the project. River passenger boats will begin to arrive directly from the center of St. Petersburg. The journey will take only 30 minutes. The “Meteors” will connect Kronshtadt with Peterhof, which will create a single tourist route. The possibility of launching a high-speed passenger ferry from Helsinki is also being explored. Kronshtadt should become a new “window to Europe”!